Being a ninja and a computer geek has its disadvantages. Take, for instance, the time I was escaping a horde of undead, mutant orchids, which, due to a mystical curse, had grown both arms and legs and were hell-bent on strangling their woven tentacles around my innocent torso. You can imagine my dismay when I attempted to produce a flurry of ninja stars and discovered that half of my stash had been mixed with floppy disks. Lucky for you, you don't need to imagine too well since that events of that day have been painted in the HEAD (Hall of Eternal Ancestral Dismay), which is basically a glorified Hall of Shame for ninjas. 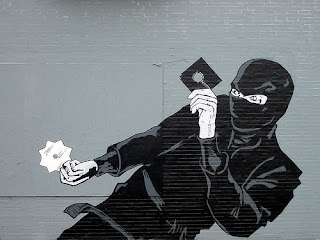 Of course, this battle should have been painted on the COCK (Corridor Of Certain Kills) but my killer floppy disk throws kind of turned into floppy miss throws. Those things are quite powerful if you leverage them correctly but you need to account for a different wind pattern than with standard shuriken...
Blagged by Unknown at 2:00 AM

It's not very Ninja....but in those Instances; I'd pack some Roundup.

Were they old school floppies or the later hard cover version? I guess even the later versions wouldn't do well over a distance.

You lost me at COCK.

Sorry, the temptation was just to great.

Oh, those floppies were old school. That was back when I was fighting Fortran Fairies and Amiga Ants. They don't make bugs like they used to.