Update on a previous post, regarding a new ninja uniform:

My new ninja uniform arrived. It blows. I'm not even going to put up pictures because it sucks that much. But here's is some dude wearing what looks like the same design (it's not me): 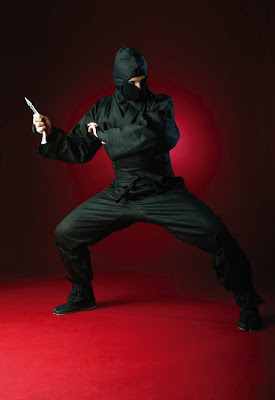 How does it suck? Let me count the ways:
I just imagine myself trudging into battle wearing this piece of garbage. The loose, baggy bits rubbing against eachother, grinding louder than cordorroy. Then I see my foe and I reach for a throwing star. ****RRRRRRIIIIIIIIIPPPPPP****, that's my utility belt pocket. Oh, no! I've been discovered. Bad ninja. But then my enemy mistakes me for a ten-year-old boy dressed up for halloween as the pointy headed leader of a cult. So, now I try to catch him off gaurd and whip out my badass ninja-fu. I try to fight but my arm gaurds are propping my hands up permanantly like a marionette. I'm frozen in permanant press.

Now I have to find someone to make new ninja gear for me...that's such a pain. Maybe it is worth trying to find my hidden gear. Curse you former master!
Blagged by Unknown at 2:00 AM

I am completely tickled that you wrote a whole post about finding the right ninja wardrobe.

That is brilliant! And funny!

And I gather you are completely serious about wearing the costume?

Maybe you could get something off etsy?

nope, it will not do...definitely no ninja vibe.

Wow, @captain dumbass I had never heard of Etsy before. That's pretty cool. Although, I think I'm going to have to do this one in person.

Same thing happened with my 3-year old's Spiderman costume. The other day my husband and I saw what can only be described as denim ninja pants. He even turned the car right around so I could see it. They were capri-style (not sure if that differentiates a ninja class or region) but my husband was all tripped out about it. I argued the point that there really aren't Ninja's anymore with the obvious exception of YOU. My husband looked at me all serious and said, "You have no idea. Ninjas, Jen, are very real." We rode in silence the rest of the way home.

It's true @jenboglass. We are a secret breed but there are many of us.

SDN. You need to fix this debacle. And pronto. I feel safer knowing you're out there. But not in Velcro.