Hey kid! Yeah you. Listen up:
When I was your age, we were poor.
I didn't have the same heroes as my friends. They would talk about GI Joe and the X-Men and I would say, "Who? What men? They ain't from the guvunment, yeah?"

We had hand-me-down heroes.

In 1986, 7-years-old, I listened to Davy Crockett records on a cheap, plastic 45 record player. It whined and drawled out tales of his daring adventures in the wild west frontier and I sung along with the theme song. "Davy, Davy Crockett! King of the wild frontier!" I knew the god-damned political propaganda lyrics front to back.

I thought someday I could colonize a new world and tame the wilderness by killing savages too. But I would need a 'coon hat first.

Although I sang along with Davy Crockett, my favorite record was called The Reluctant Dragon: Staring Touche Turtle & Dum-Dum, a 1965 Hanna Barbera production: 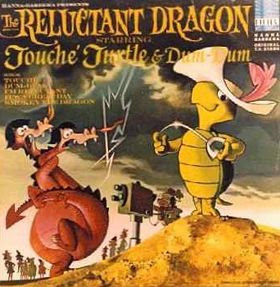 This album came into sharp moral opposition with Davy Crockett and his kill or be killed ways. The Reluctant Dragon was a pacifist and Touche Turtle had sympathy and ended up convincing the town that they could live peacefully with the natural inhabitant(s) of the land, the harmless two-headed dragon.

I started thinking maybe my records had secret messages hidden in them. Like the cipher disks that Ovaltine sent out to fans of those old radio shows. Maybe if I just spin the record in different ways I could find a cohesive thread.

After weeks of playing with my records, backwards, forwards, DJ-spinning them in wacky configurations of wickity-whack, zip-zap, scratch, I finally found something.

While negotiating peace with the dragon, Touche Turtle can be made to say, "I...aM Davieee Crock-ett." It sounds strange but it's definitely what he said. I tried to get more out of him but aside from cryptic mumblings about rutabagas, he didn't really elude to the wild frontier. I tried to rationalize ways that Davy could have been magically transformed into a turtle, moving to a life of pacifist-sympathetic chivalry. It all started to make sense.

When we could finally afford a TV, we got an antique.

We were so poor, our television only got reception for shows broadcast at least twenty years in the past. We watched Leave it to Beaver and I Love Lucy as if they were modern, all black and white, in the height of technology. I walked around saying, "Golly, Gee Willikers. Ah, Shucks!" and, "Gee that's swell!"

When I said this to a friend at school, he nearly blacked out in shock. "Dude! What was that?"

I started blankly at my friend who was dressed like a New Kid on the Block and suddenly realized I was a little out of touch.
Blagged by Unknown at 3:00 AM

'Hand me down heroes' would make an awesome band name. I'm so adding to my list with a credit to you, of course.

were you really only 7 in 1986? crikey, i feel old. funny thing, i used to watch davy crockett back in the day. LOL

In this spacetime continuum, I was 7...