We have a couple of friends with a 7 month-old baby. They are named Heather and Mike.

This makes my life a little confusing since my wife likes to talk about celebrities and other pseudo-famous people we know of or have communications with as if they are our dear friends.

I can't always safely assume one or the other. Both sets of parents have a child with enormous eyes and a big personality. They seem to be quite similar.

Lately, I've had a hard time discerning reality from fiction. Especially when it comes to identity, all wrapped up in celebrity influence.

My grandmother just told me in an email that I look like Ryan Philippe.

Even though I've seen many of his movies and Antitrust is one of my favorite films of all time (I shed tears at the end--that whole insignificant-hacker-sticking-it-to-the-corrupt-man-through-global-broadcasting thing always makes me feel nostalgic and warm inside) I had to look up his name on Google because I'm just that bad with names.

My wife thinks I look more like Michael Vartan, the guy from Alias she had a crush on for the longest time. Except for one thing: he's a little too old to play me: 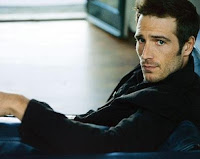 I think my wife looks like Drew Barrymore, but only in the days when Drew was hot: 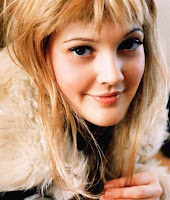 Lately, we've been running around causing chaos on the world, I hacking major corporations for the good of mankind, the wife spouting poetry and getting all Charlie's Angels on everyone's ass and our little baby Drew starting fires with her mind: 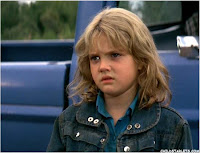 She's usually really sweet and happy but when you get her mad, your hair usually catches on fire. She makes the cutest monkey faces :)
Blagged by Unknown at 2:00 AM

Fire? That's a bitch. Does she have any control over it? My monkeys shoot lasers out their eyes which is pretty bad, but the damage is usually confined to small areas.

Lasers and Fire? Damn.
All my girls can do is blow Snot Rockets.

Damn ciii, 'only rockets'?! Rockets are no small thing.

She's learning to control the fire, but slowly. It's kinda tricky. Especially when she starts laughing hysterically. Then she loses control.

You don't want to mess with Drew as a kid. Yes, she was a firestarter and she was also filled with lots of alcohol. This made her highly flamable.

Also, I may link to your Bigotry post next week. I'll give you credit and linky love. Let me know if you have any objections. I'll let you know when I'll post.

I never have a problem with link love and referencing. Even if you want to trash my opinions. Any press is good press :)