We've started singing the alphabet song to Code Name Alice. Whenever she's upset or tired and having trouble finding her Zen point, we just sing it and she immediately smiles and calms down.

She loves the different sounds and for our own sake, we make up new tunes with the letters.

Since she was born, I've been experimenting with different sounds. I pop my lips, snap my tongue, go through the phonetic list. But our favorite is the rolling letter 'L'. She always gets a kick out of it when I stick out my tongue in "La la la llllllrlrlrlrlrlrlrlrlrlrlr" and rat-a-tat like a rolling machine gun or a gentle kitty cat. It's such a wonderfully versatile sound. It can be soft and quiet or hard and loud. It can represent fun, love, curiosity, puzzlement... the list goes on.

Anyway, she sits with rapped attention when I do this and recently, she's been trying to mimic the sound. But she doesn't have the tongue control (it's a pretty advanced move), so she decided the best way to make a similar noise is to put her lips together and blow a burble. It's awesome. That was a face and sound I had not made with her; she found it on her own. And it's actually a decent substitute for the rolling L, at least on a basic level. They both have a repetitive motor sound and just as much versatility. So, now, when I give her the rolling L, she gives me the spittle flinging raspberry burble.

I'm trying to show her the difference and she seems to be catching on. But she still can't make a good "L" sound :)

She did, however, manage to psychically tell me that she isn't worried about having pictures posted since she can keep her anonymity by growing at will: 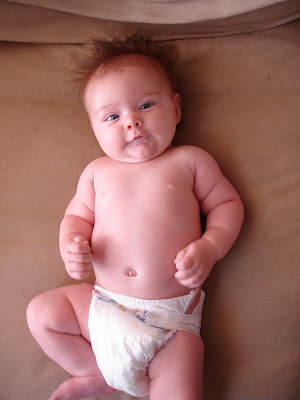 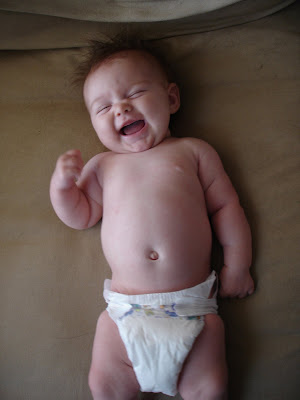 Ah, yes. She is a master of disguise at an early age. I love it when your child starts to communicate with you, no matter how small. It's amazing.

(And, by 'your child', I meant that in the general sense. It's not like I'm communicating with YOUR child. That would be weird.)

That, is some impressive hair Code Named Alice.

How pregnant am I, reading through a weeks worth of missed posts and only commenting on the baby photo? Cliched, I know.

Anyways, what a perfect chunky little monkey you have yourself. I'm dying from the sweetness. Seriously, she's delicious.