Exploits of Ninja & Child - #1 - The Gates of Epiphany

I just read Halushki's post "Killing Fairies" (I know, a bit late, but it was just featured on Blog Nosh). I feel a strong need to preface my post with this quote from one of the greatest authors and thinkers of all time:

"Isn't it enough to see that a garden is beautiful without having to believe that there are fairies at the bottom of it too?"
--Douglas Adams

Now, don't get me wrong, fairies are great and fun and cute and all, and as a ninja, my daughter will have to understand the full extent of the hidden underworld and all the supernatural foes she will have to battle. But, oh, the joy it will be when she starts peering into the Microcosmos and learning all about how flowers reproduce and that the little garden has it's own ecosystem and that this all came into being through a marvelous evolutionary process that took billions of years and oh, how it happens to us every day that we evolve, change, grow, adapt to our surroundings and to expectations. How beautiful it is! I look forward to that day.

That said, here is in fact a legendary tale... or so it will be when my daughter reads it in her spacetime continuum... which is still playing out to this day and will continue for many more. Puzzled? Read on. What follows is a recent escapade which will become part of the major compilational, autobiographical spectacle that she will reference as her father's legacy. [compilational? If it wasn't a word, it's a word now; ask Erin Mckean.] Hopefully, the final text will also serve as a recipe book for slaying wicked foes.

In the Forgotten Empire there lives a fierce warrior, a stealth assassin, vigilantly saving the world from the mystical forces of darkness and venturing into the unknown boundaries of the Multiverse. He faces enemies with sleepy-fu, slow loris style, tricking his opponents with slow, limp yet diliberate movements, striking when least expected.

His trusted side-kick, Code Name Alice, a hyper intelligent, trans-sentient, projectile empath has traveled from the future to seek out and fight for human immortality. When she is awake, she can banish the mightiest foe with a single huff-puff, "Ha!" Her laugh is that great. When she gah's her giggly-gah, Chuck Norris implodes. Her laughter makes Jack Bauer wish he had 48 hours. 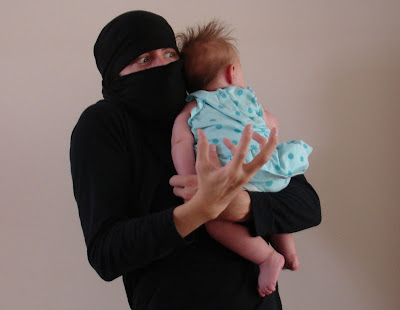 Sleep Deprivation Ninja hurls the invisible cabbage straight through the clouds. The force of wind passing through rips them asunder as the ninja, carrying Alice, sprints in lightning steps after the herbaceous sphere.

The cumulous clouds part for many leagues, the foggy mist coalescing in fat drops and streams, rapidly raining down in what is becoming a torrential ocean. After several hours of running, the clouds show no sign of ending, while the ninja is now quickly tip-toe-tapping the very surface of wild and washing waves.

Code Name Alice stirs from her slumber. As her eyes open, she sees Sleep Deprivation Ninja focused on the task at hand and she smiles. A little beam of sunshine bursts through the clouds, which Sleep Dep Ninja mistakes for a military space-station assault weapon called Sol. He attepts to dodge the light but it grows as he moves. Inspecting his options, he glances down at Alice and sees her smile. All is now clear. He returns the jest and they share a hearty, bulbous bellylaugh. The clouds sublimate, instantly vanishing into the atmosphere.

Sleep Deprivation Ninja and Code Name Alice float on the open sea, staring off into the sky, laughing all the while. Epiphany.
Blagged by Unknown at 1:50 AM

Labels: Exploits of Ninja and child

Ah. The Invisible Cabbage. I still fall for that. Pirates are funny that way.
Stay sharp SDN.

This is a comment on a comment you left on BHJ site about the black snake. So, okay, how scream funny was your Whitesnake reference there? My husband and I wasted a good thee hours and a lot of brain cells watching the "Here I Go Again" video among other hair bands last night. Clever and insightful. I mean you, not David Coverdale.

Thanks for the kudos jenboglass but I'm serious. Now that you've been bitten by the Whitesnake you are forced to go on a long Journey where you will encounter a Def Leppard, gaze into the Eye of the Tiger, possibly get Cat Scratch Fever from the mutant Scorpion, ultimately to face the Final Countdown.

Great story, love. I can't wait until Alice is old enough to read it.

You quoted Douglas Adams? You're stuck with me for life, Ninja.