In Ukraine, Zoo Smoke You

I love the zoo. We got a membership for my birthday as a gift from my step-mother-in-law, a couple of months before my birthday even. She's awesome--unusual? Anyway, it's great to go to the zoo and not have to worry about getting your daily money's worth. We go all the time, just to have a picnic and check out a couple of our favorite animals.
My favorite: Slow Loris [wiki] 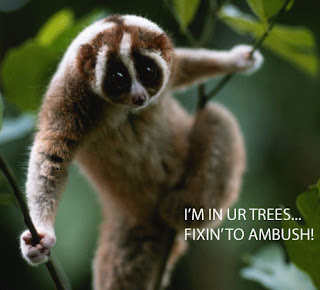 Why is the Slow Loris so amazing, you ask? Because it's a little ninja.

"With their slow quiet movements, they creep to their prey, in order to catch it with a lightning-quick snatch."

Slow loris moves deliberately, with purpose, with no wasted actions. They are the Zen ninjas of the midnight trees. If I had night-vision goggles, I would be in the day/night exhibit all day watching and learning from the Slow Loris.

"Slow lorises can produce a toxin which they mix with their saliva and use as protection against enemies. Mothers will lick this toxin onto their offspring before leaving them to search for food. The toxin is produced by glands on the insides of their elbows. The lorises lick or suck it into their mouths and deliver it when they bite."

Producing venom in your arms and licking it off so you can bite something and mean it is pretty freaking cool. No? [comment with your favorite venom type or story]

So, I'm at the zoo with my wife and baby girl. Just as we pass the hyenas, I notice three guys smoking on a bench, right next to the walkway. My wife used to smoke so the smell of cigarettes really bothers her. We have our two month year old girl with us and it's a non-smoking zoo (go figure) so it really bothers me.

I walk over to them and say, "Hey, it's a non-smoking zoo."
The three men look at me blankly and glance about each other. The middle one is obviously in charge and says something in Russian or Ukrainian or some other form of vocal Cyrillic, looking right at me as if I know exactly what he is saying. I mime smoking and stubbing it out. The one on the right raises his eyebrows, as if both impressed and disturbed with my brazen death wish. He looks at the guy on the other side, who is now giving me the finger, with a mock-American stupor attached to his face.

Sleep Deprivation Ninja only got 4.23 hours of sleep last night. This will not go unpunished.
Before the finger-flipping carcinogen addict can retract his finger (or his statement), his middle left pointer appears to his neighbors to mysteriously reposition half way up his nostril.
My Slow Loris Fu is pretty good.

The man in the middle is taken aback and begins to wind a head butt in my direction.
A head butt? When will people learn? My knee instantly supplants the position my head previously held and the sucker drops, bloody nose and wounded pride. The hyena's chuckle and soon they are howling with hysterically jovial jest. If they had fingers, they would be pointing right at these guys. The third smoker doesn't even get up; he just stares in bewildered horror. Sleep Deprivation Ninja removes the cancerous torches from the three men and puts them out.

It's a non-smoking zoo. The ninja is on alert.
Blagged by Unknown at 7:13 AM

This shit kills me.

I made a special Blog Ninja box for you. This is awesome.

If you ask me, there's not enough blood at the zoo.

Why do idiots always hang out in three packs?
I would have used my chinese star.

I sleep better at night knowing you're out there.

Umm, do you contract your services out? Like, could you come and kick my ass every night as I sneak out to smoke on the porch. The Chantix is making me really sick..Maybe I just need a little ninja.?